An armed man has been arrested after stabbing a woman in central Sydney and being detained on the street by members of the public. 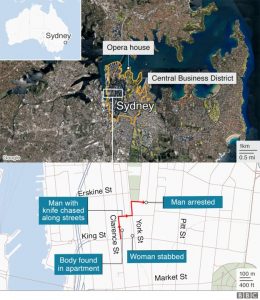 A second woman was found dead inside an apartment building on the same street.

“All the information we have at hand would link these two crimes,” police commissioner Mick Fuller said at a press conference. He said the suspect was a “lone actor” with a history of mental health issues. He was known to police but “his history was unremarkable compared to the gravity of the crimes he committed”, Mr Fuller said.The police commissioner said the suspect had some ideologies related to terrorism, but had no apparent links to other terrorist organisations.

It is believed the man had a USB drive containing details of mass killings in New Zealand and the United States.

Mr Fuller said the stabbing is not currently being classed as a terrorist incident but this would be reassessed as the investigation continues.

Three “heroes” were praised by New South Wales Police Minister David Elliot for their role in detaining the man and acting “well and truly beyond the call of any citizen”. He also congratulated the firefighters involved.

The incident unfolded at about 14:00 local time (04:00 GMT) on Tuesday near Clarence St and King St, a busy area in the city centre. Video footage shows the suspect jumping on a car wielding a knife, shouting “Allahu Akbar” and “shoot me”, as another man confronts him with a wicker chair.

Police said the suspect had stabbed a 41-year-old woman in the back before being restrained by three members of the public. They “placed him essentially under arrest, even though he was branching a large butchers knife and was clearly dangerous”.

Emergency services arrived shortly after and following a wider investigation, the body of a 21-year-old woman was found nearby. The injured woman was taken to hospital in a stable condition. Police said there was no ongoing threat.

Three British men were among those who helped take the man down.

Lee Cuthbert, Paul O’Shaughnessy and Luke O’Shaughnessy, all from Greater Manchester, were working in an office nearby when they heard the commotion outside and ran out to help. “I could have easily just looked out of the window and not done anything,” Luke O’Shaughnessy, a former Thai boxer, tsaid. “I thought we’ve got to run towards it.” He described how he helped force “a chair over his legs, a chair over his torso and then a milk crate on his face” to keep the man in place.

Mr O’Shaughnessy said he was feeling “shocked” but happy that everyone he knew was alright, considering that “some people haven’t got that luxury tonight”.

The taxi driver whose car was jumped on by the man described him as “completely fearless”. “I froze for probably a split second but then I thought I’m hoping that he’s not covered in any explosives or anything,” he told Nine News Sydney. The Uber driver then quickly accelerated to force the man off his car.

One witness said she saw the man jump on a car before he was confronted by people on the street who tried to fight him with chairs and pipes. “The guy had blood on his shirt. He was screaming, holding a knife on his hand, and running up a car just in front of us,” Japanese tourist Aya Yamada said. “Another guy with a chair and some firefighters were chasing him. I was in the car with my husband and friends, and could run away immediately.”

Videos posted online show a man running through the streets brandishing a knife, before people attempt to stop him and eventually tackle him to the ground.

Other images show the suspect being pinned down with a chair and a milk crate, then being taken away by police.

Supt Wood praised those who had intervened in the “extremely dangerous and hostile” situation, saying their actions had helped capture the man. “They were significantly brave people,” Supt Wood said.

Authorities have urged people to avoid the area.

Australian Prime Minister Scott Morrison tweeted that the “violent attack” was “deeply concerning” but praised the “brave actions” of those who restrained the suspect.