Chancellor Angela Merkel has said Germany has an unending responsibility to remember the Nazis’ war crimes, as she made her first trip while in office to the Auschwitz death 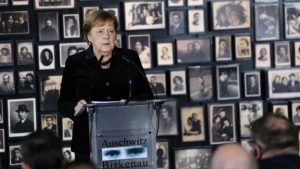 The responsibility was “part of our national identity”, she said. Her visit comes amid a rise in German anti-Semitism and ahead of the 75th anniversary of the camp’s liberation.

The Nazi regime murdered an estimated 1.1 million people, the vast majority of them Jewish, at Auschwitz-Birkenau.

She walked through the notorious “Arbeit macht frei” (work sets you free) gates at Auschwitz and then held a minute’s silence at the so-called Black Wall, where thousands of prisoners were executed.

She then moved to the Birkenau site where she gave her speech. “Remembering the crimes… is a responsibility which never ends. It belongs inseparably to our country,” Mrs Merkel said. “To be aware of this responsibility is part of our national identity, our self-understanding as an enlightened and free society… a democracy.”

Germany continued to have “deep shame” for what happened in Auschwitz-Birkenau.

“There are no words to express our sorrow,” Mrs Merkel said. “I bow my head before the victims of the Shoah,” she told the gathered Holocaust survivors.

Mrs Merkel also acknowledged the rise of anti-Semitism in her country, saying to combat it “the history of extermination camps has to be shared”.

Major events are planned for the 75th anniversary of the liberation of Auschwitz by Soviet troops on 27 January. But Mrs Merkel has chosen to go to the site now, and to attend the 10th anniversary of the Auschwitz-Birkenau Foundation, a group that tries to preserve the camp as a memorial and a warning for future generations.

As part of her visit, Germany’s federal states announced a €60m (£51m; $66m) gift to the foundation. Though she has been to other camps, including Dachau and Buchenwald in Germany, this is the chancellor’s first visit to the most notorious Nazi death camp, located west of the Polish city of Krakow.

German chancellors have made the trip to Auschwitz before – Helmut Schmidt visited in 1977 and Helmut Kohl in 1989 and 1995. But none has visited since, and this first visit by a chancellor for 24 years is being viewed as highly symbolic. Neither chancellor had to confront a rise in anti-Semitic attacks.

Less than two months ago, a 40-year-old woman and 20-year-old man were shot dead outside a synagogue in eastern Germany. A 27-year-old man confessed and admitted having a far-right, anti-Semitic motive for the shooting.

Official figures showed 1,646 hate crimes against Jews were committed in Germany last year – an increase of 10% on the previous year. Physical attacks against Jews in Germany also rose in the same period, with 62 violent incidents recorded in 2018, up from 37 in 2017.

German reports suggest Mrs Merkel has chosen to visit now in case she is forced out of office earlier than planned. She has previously said she will not stand for re-election in 2021. Added to this are fears Mrs Merkel’s governing coalition could fall apart.

Vice Chancellor Olaf Scholz lost his bid for leadership of the centre-left SPD in November. The party is now expected to vote on whether to stay in the coalition with Mrs Merkel’s conservative CDU/CSU.

Originally an old army barracks converted by invading Nazi troops to hold Polish political prisoners in 1939, it became a vast complex of about 40 camps, and the epicentre of the Holocaust. Birkenau was set up in 1941 a short distance away.

A million Jewish Europeans were murdered in gas chambers or died of starvation and disease at the site between early 1942 and late 1944. Tens of thousands of non-Jewish Poles, Roma, Soviet prisoners-of-war, homosexuals and political prisoners were also murdered.