A terror suspect who caused nine hours tailbacks at British ports after absconding has been jailed for breaking counter terrorism rules. 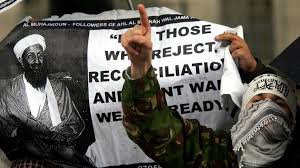 The man, who cannot be named for legal reasons, is a senior member of the banned group al-Muhajiroun. He triggered a manhunt in September after cutting off an electronic monitoring tag and fleeing his home.

Appearing at the Old Bailey by video link from prison, the man was jailed for three years and two months after previously admitting six breaches of his Terrorism Prevention and Investigation Measures (TPIM) order.

TPIM notices allow the authorities to monitor and control people considered to be terrorists — but who are not facing criminal charges.
Prosecutor Kate Wilkinson said that, on 15 September last year, the man — known only as LF for legal reasons — cut off his tag, burned documents, ordered a taxi to London, and left his home at 01:00 BST. He was arrested in central London around 36 hours later having arranged to hand himself in.

Ms Wilkinson said the manhunt for LF resulted in Operation Stack being introduced — a traffic management procedure that involves lorries departing from Dover being parked on motorways — and checks at UK ports generated «nine hours tailbacks» for travellers. She the operation took place to ensure «that he could be found and not leave the jurisdiction».

The court heard that prosecutors accepted that LF’s actions in absconding did not have a terrorist motive.

Catherine Oborne, defending, said her client had no plan during his «short lived» flight. The barrister said he had spent the night in the «open air» in London, and that he has experienced «better mental health» since being remanded in custody because he is less socially isolated or worried about breaching his TPIM measures.

Earlier this month LF was one of two men who lost an appeal against the measures placed on them. The pair were the first people to be made the subject of a TPIM for the second time.

LF is a leading radicaliser in al-Muhajiroun, an outlawed organisation that been linked to multiple attacks and plots, including Westminster Bridge, Fishmongers’ Hall, and the murder of Fusilier Lee Rigby. He was an associate of Khurum Butt, the ringleader of the London Bridge attackers who murdered eight people in June 2017.

Following the 2019 court case, he continued to engage with other al-Muhajiroun members. He was subsequently placed under the new TPIM in November that year after he was found to be involved in fresh «terrorist related activity», including encouraging terrorism by saying that attacks are permissible.