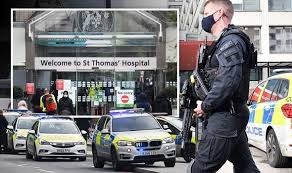 Police were called at 09:18 BST when a man was reported making threats inside the hospital. The Met said “no weapons” were seen during the alert. The man was tracked down and spoken to by officers, but police said there had been no arrests and the alert was not being treated as terror-related.

The alert led to road closures on Westminster Bridge. The Met Police said the hospital was not evacuated.

The alert ended at 10:30 and the road closures around the hospital and Westminster Bridge were removed.