Taliban fighters, whom US-led forces spent billions of dollars trying to defeat, are now openly active in 70% of Afghanistan. 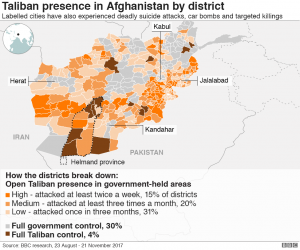 Months of research across the country shows that the Taliban now control or threaten much more territory than when foreign combat troops left in 2014.

The Afghan government played down the report, saying it controls most areas. But recent attacks claimed by Taliban and Islamic State group militants have killed scores in Kabul and elsewhere.

Afghan officials and US President Donald Trump have responded by ruling out any talks with the Taliban. Last year Mr Trump announced the US military would stay in the country indefinitely.

IS is more active in Afghanistan than ever before, although it remains far less powerful than the Taliban.

The Taliban are now in full control of 14 districts (that’s 4% of the country) and have an active and open physical presence in a further 263 (66%), significantly higher than previous estimates of Taliban strength.

About 15 million people – half the population – are living in areas that are either controlled by the Taliban or where the Taliban are openly present and regularly mount attacks.

END_OF_DOCUMENT_TOKEN_TO_BE_REPLACED 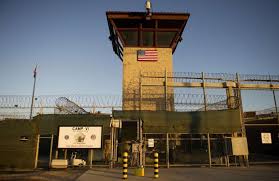 Mr Trump announced the move in his State of the Union address. The decision reverses that of former President Barack Obama, who had said he wanted to close the controversial site “as soon as practicable”.

The facility in Cuba has been used since the 9/11 attacks to detain what Washington calls “enemy combatants”, but only 41 prisoners remain there. Hundreds were transferred away from the facility during the Obama era.

A White House statement confirmed the order had been signed to resist the detention facility’s closure, and affirmed the administration’s right to detain enemy combatants when necessary.

“Terrorists are not merely criminals. They are unlawful enemy combatants. And when captured overseas, they should be treated like the terrorists they are,” Mr Trump said during Tuesday’s speech. “In the past, we have foolishly released hundreds of dangerous terrorists only to meet them again on the battlefield,” he added, giving as an example the Islamic State group’s leader Abu Bakr al-Baghdadi, who was held in US custody in Iraq.

END_OF_DOCUMENT_TOKEN_TO_BE_REPLACED

A highly professional burglar with a military background is suspected of carrying out series of violent house raids across south-east England. 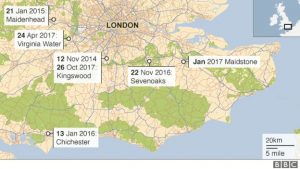 Armed with a sawn-off shotgun, the man stakes out expensive Home Counties properties and has taken jewellery, watches and heirlooms worth about £1m. He knows the exact layout of the properties and location of safes by the time he strikes, Surrey Police said. Police said he may be ex-military and possesses “specialist skills”.

Police forces in Berkshire, Kent, Surrey and Sussex are investigating a series of raids between November 2014 and October 2017. Officers believe the burglar stakes out his targets for some time before launching an attack- a method which has led newspapers to dub him the Night Watcher.

Det Insp Dee Fielding, who is leading the investigation, said the man strikes approximately every six months and is not “an opportunist burglar”. “This is absolutely not an amateur,” she said. “He stakes out these houses over a number of days, sometimes for a couple of weeks. We can see that on CCTV he is hiding in gardens – he’s looking at houses to establish what the routines are of those within the premises.”

END_OF_DOCUMENT_TOKEN_TO_BE_REPLACED

Security concerns have been raised after a fitness tracking firm showed the exercise routes of military personnel in bases around the world. 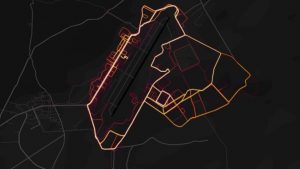 Online fitness tracker Strava has published a “heatmap” showing the paths its users log as they run or cycle. It appears to show the structure of foreign military bases in countries including Syria and Afghanistan as soldiers move around them.

The US military was examining the heatmap, a spokesman said.

San Francisco-based Strava provides an app that uses a mobile phone’s GPS to track a subscriber’s exercise activity. It uses the collected data, as well as that from fitness devices such as Fitbit and Jawbone, to enable people to check their own performances and compare them with others. It says it has 27 million users around the world.

The latest version of the heatmap was released by Strava in November last year. It is a data visualisation showing all of the activity of all of its users around the world.

END_OF_DOCUMENT_TOKEN_TO_BE_REPLACED

Militants have killed at least 11 soldiers in an attack on an army post in Kabul, the fourth major assault in a surge of violence in just over a week. 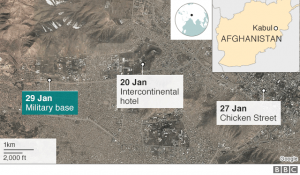 Sixteen other soldiers were injured in the raid near the main military academy in the west of the Afghan capital.

Four militants were killed, a fifth was arrested. Islamic State (IS) militants claimed the assault. Taliban and IS attacks have soared this month, leaving scores dead.

On Saturday an ambulance packed with explosives killed more than 100 people in the Chicken Street shopping area. The Taliban claimed the attack, the deadliest in months.

Marshal Fahim National Defense University is sometimes referred to as “Sandhurst in the Sand” as it is closely modelled on the British officer training academy. It has been attacked before. In October 2017, 15 military cadets were killed in an explosion outside it as they were leaving by minibus. That attack was attributed to the Taliban.