Russia says one of its warships caught and chased off a US Navy destroyer after it entered territorial waters in the Sea of Japan on Tuesday. 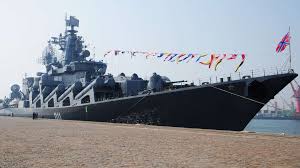 Moscow accused the USS John S McCain of travelling 2km (1.2 miles) across its maritime border in Peter the Great Gulf and says it threatened to ram the ship.

The US warship then left the area, according to Russia.

However, the US Navy denied any wrongdoing and said its ship had not been “expelled”. The incident took place on Tuesday in the Sea of Japan, also known as the East Sea, a body of water bordered by Japan, Russia and the Koreas.

According to the Russian defence ministry, its Pacific Fleet destroyer the Admiral Vinogradov used an international communications channel to warn the US ship about “the possibility of using ramming to get the intruder out of the territorial waters”. “The Russian Federation’s statement about this mission is false,” said a spokesman for the US Navy’s 7th Fleet, Lt Joe Keiley. “USS John S McCain was not ‘expelled’ from any nation’s territory.” He said the US “would “never bow in intimidation or be coerced into accepting illegitimate maritime claims, such as those made by the Russian Federation”.

Such incidents at sea are rare, although the Admiral Vinogradov was also involved in a near-collision with a US cruiser in the East China Sea last year. Both Russia and the US exchanged blame for that incident. The two countries regularly accuse the other of dangerous military manoeuvres – at sea and in the air.

In 1988, a Soviet frigate, the Bezzavetny, “bumped” a US cruiser, the Yorktown, in the Black Sea, accusing it of intruding in territorial waters.

Relations between Moscow and Washington remain strained, and President Vladimir Putin has still not congratulated Joe Biden on his victory in the US presidential election. The two countries have also yet to finalise the last remaining nuclear arms pact between them, which is due to expire in February.

In 2017, the USS John S McCain was involved in a collision with an oil tanker off Singapore, when 10 sailors were killed.