Prison staff guarding extremist offenders are under “constant threat” from inmates who intend to “behead a guard and stream it online”, the Prison Officers’ Association (POA) said. 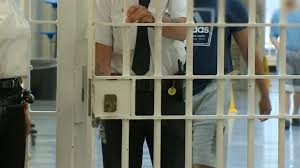 Last week two men were convicted of trying to murder an officer at HMP Whitemoor in Cambridgeshire. POA chairman Mark Fairhurst said the threat posed had never been greater.

The Ministry of Justice (MoJ) said measures had been stepped up to “stop the spread of poisonous ideologies”.

During the trial, it emerged Ziamani, an already-convicted terrorist, was eight months into the government’s de-radicalisation scheme and Hockton became a radical Islamist while in jail.

Mr Fairhurst said their “abhorrent attack” highlighted the “bravery of staff working across the high-security estate”. He said: “We are seeing increasingly that the people incarcerated for extremist crimes are more violent and more radicalised. “We must have a fundamental review to find out how effective our de-radicalisation programmes are. “We had intelligence passed on to us that the threat of radicalisation and attacks on prison staff was real and was imminent, and the intention of Jihadi extremist offenders – as highlighted by the Whitemoor attack – is to take a prison officer hostage, behead them and somehow screen that online via the use of a mobile phone. “If you look at the tactics of extremist offenders, that is always a constant threat; a constant concern.”

Ministers are under pressure to improve counter-terrorism in the prison and probation services after a string of apparent failures to manage extremist offenders.

A separation centre has recently opened at HMP Woodhill in Milton Keynes, from where the London Bridge attacker Usman Khan was released on licence in 2018. The unit, believed to be among two in the UK currently in use, will hold influential, radical inmates away from the prison population.

A former inmate, who was released from Woodhill in 2018, said he was on a wing dominated by radical Islamist gangs who preyed on young inmates and tried to convert them. “There were a lot of people convicted of terror offences who would get together and sit at tables and talk about the Islamic State,” said the man, who asked not to be identified. “They try to bully you into thinking that you need their protection and give you a set of beliefs to follow.” He said if inmates refused to listen to their ideas, then an attack would occur. “It’s like zero to 100 in a split second. In my case a group came to my cell, but I fought back and it was quick,” he said. “But I got off lightly, I have seen people being attacked with a blade for saying no to them.”

A Ministry of Justice spokesperson said: “We have trained more than 29,000 officers to better spot the signs of extremism and have increased the number of specialist counter-terrorism staff. “We will separate the most subversive prisoners from the general population where necessary.”