A number of people have reportedly been shot dead or wounded at a protest against police brutality in Nigeria’s biggest city, Lagos. 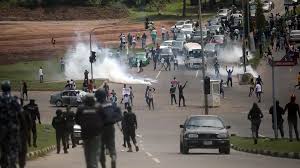 Witnesses and the rights group Amnesty International said several people were killed and wounded when soldiers opened fire. The state governor said about 25 people had been wounded but only one person had died.

An indefinite 24-hour curfew has been imposed on Lagos and other regions.

Protests over a now-disbanded police unit – the Special Anti-Robbery Squad (Sars) – have been taking place for two weeks, with demonstrators using the social media hashtag #EndSars to rally crowds. As tensions continued to rise on Wednesday, police in different districts of Lagos fired shots in the air to disperse people defying the curfew, the BBC’s Nduka Orjinmo reports from the capital, Abuja.

Protesters who briefly gathered again at the Lekki toll gate – where Tuesday’s shootings took place – were forced out by police, he adds.

President Muhammadu Buhari has appealed for “understanding and calm”. However, plumes of smoke could be seen above Lagos on Wednesday. A reporter for AFP news agency said several buildings were in flames around the Lekki area. A bus station was reported to be on fire in another district while a major TV station – linked to one of the governing party’s top politicians – was reportedly set alight by people throwing petrol bombs.

The headquarters of the Nigerian Ports Authority was also set on fire, local media said.

Witnesses spoke of uniformed men opening fire in the wealthy Lekki suburb on Tuesday evening. Soldiers were seen barricading the protest site moments before the shooting.

Social media footage streamed live from the scene shows protesters tending to the wounded. An unnamed witness said that shortly before 19:00 local time soldiers “pulled up… and they started firing directly” at peaceful protesters. “They were firing and they were advancing straight at us. It was chaos. Somebody got hit straight beside me and he died on the spot,” he said.

Four witnesses told Reuters news agency that soldiers had opened fire on demonstrators. One of them, Alfred Ononugbo, 55, said: “They were firing into the crowd. I saw the bullet hit one or two persons.”

The Premium Times newspaper quoted witnesses as saying about 12 people had been killed.

In a tweet, Amnesty International Nigeria said it had “received credible but disturbing evidence of excessive use of force occasioning deaths of protesters at Lekki toll gate in Lagos”.

In a statement on Wednesday, President Buhari did not directly refer to the shootings, but called on people to have patience as police reforms “gather pace”. A statement issued by his office said the dissolution of the Sars was “the first step in a set of reform policies that will deliver a police system accountable to the Nigerian people”. “The presidency wishes to reiterate the full commitment of the Buhari administration to the implementation of lasting police reforms in Nigeria,” it added. The army has not issued a statement on events in Lekki, but in several Twitter posts it described media reports as “fake news”.

Lagos State Governor Babajide Sanwo-Olu, who visited hospitals on Wednesday, said about 25 people had been wounded in what he described as an “unfortunate shooting incident”. He initially said no-one had been killed but later said one person had died in hospital due to “blunt force trauma to the head”.

Contradicting the army, he said that the military had been at the scene at the time of the shooting despite public assurances that soldiers would not be deployed until after the start of a curfew at 21:00. “I think about seven o’clock or thereabouts there was a small unit of the military that went [to Lekki] and we heard that gunshots were fired,” he said.

Former US Secretary of State Hillary Clinton called on President Buhari and the army “to stop killing young #EndSARS protesters”. And former US Vice-President Joe Biden – who is standing against President Donald Trump in next month’s election – also urged authorities to end the “violent crackdown on protesters”. “The US must stand with Nigerians who are peacefully demonstrating for police reform and seeking an end to corruption in their democracy,” he said in a statement.

Nigerian footballer Odion Jude Ighalo, who plays for Manchester United, accused the Nigerian government of killing its own citizens. “I’m ashamed of this government,” he said in a video posted on Twitter.
Protests began nearly two weeks ago with calls for the Sars police unit, which had been accused of illegal detentions, assaults and shootings, to be disbanded.

President Buhari dissolved the unit on 11 October. But the demonstrators called for more changes in the security forces as well as reforms to the way the country is run. Mr Sanwo-Olu has said that criminals have hijacked the protests.